Just past the Marriott’s doors, I asked a valet, “Which way to the river?”

“What river?” he responded.

I asked two more hotel employees and heard the same question. The river that bears your city’s name, I thought, but just thanked them and took a guess. My map had showed the Los Angeles River less than two miles to the east, so I ran toward the new sun and hoped for the best. In a city like LA, I figured, it was probably less natural landmark than trash-strewn aqueduct, anyway something easy to overlook, to forget. But still. It’s hard for me to trust a city that doesn’t know its own rivers. 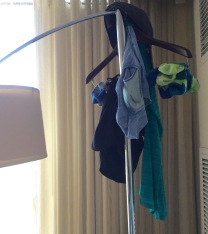 Running clothes hung by an air vent to dry: my version of a Calder mobile.

Before we get to the rest of that run, however, a little background: Despite the hungover disbelief with which my admissions of daily running at AWP are often met, these runs are my only real way of confirming that, yes, year after year, the conference does indeed take place in a different city. Without running, it would simply seem as though each spring I’m wormholed to the same bizarro waystation of a fluorescent-lit convention center, with its labyrinthine set of escalators and unmarked hallways, and a hotel with geometrically patterned carpet, slow elevators, and bad wifi. But, due to my runs, I can say with some assurance that my very first AWP was in Vancouver because I can still recall the wind along the seawall there. Three years ago, I was in Boston, skidding across pedestrian bridges slick with black ice, and two years ago it was Seattle, huffing up and down steep hills redeemed by morning views of the Cascade mountains.

But my run in LA, however, made me wish I’d slept in, stayed inside, or had somehow learned to love treadmills. As I ran toward the river, I quickly understood it was not just nature the city had forgotten. Block after block was filled with men in various states of disrepair, many slumped in doorways or flat on their backs along the curb. I turned my headphones up to drown out whatever was being shouted at me. But by the time I was fully immersed in what I later learned was Skid Row, it felt too dangerous to turn back. And I couldn’t simply turn north or south, as the narrow cross-streets were choked by tents jammed close as a series of sidewalk squares, rigged from grocery carts, boxes, and ragged blue tarps. I relinquished my planned route and turned left at the first major intersection. That roofline of synthetic blue was the closest thing I saw to a river.

And as I ran into streets increasingly clean and populated, what struck me most about that long sad stretch, with its awnings scrubbed of even the ghosts of past signs, its shop windows soaped or hastily painted over, it doors ajar, buildings gutted and open to any squatter who wandered in, was how truly forgotten it seemed. I could not remember seeing a single new billboard or poster or ad of any kind, as though these people’s desires—a population that nears 18,000—that these people’s needs, with no money behind them, were not even worthy of recognition, let alone encouragement.

Two weeks later, I’m still haunted by those images. Though I’ve lived in marginal neighborhoods before, in Oakland, in San Francisco, at least those places were viable; there were families and shops and bus stops. I’ve never seen a place so completely abandoned. And no matter how much fun I had at the conference—and I enjoyed it a great deal—for better or worse, that run will be what I know I’ll remember.

Jessica Jacobs is the author of Pelvis with Distance, winner of the New Mexico Book Award in Poetry and a finalist for the Lambda Literary Award. Her chapbook In Whatever Light Left to Us was published by Sibling Rivalry Press and her second full-length collection Take Me with You, Wherever You’re Going is forthcoming from Four Way Books in 2019. An avid long-distance runner, Jessica has worked as a rock climbing instructor, bartender, editor, and professor, and is now the Associate Editor of the Beloit Poetry Journal. She lives in Asheville, North Carolina, with her wife, the poet Nickole Brown.
View all posts by Jessica →
This entry was posted in on the road, posts by Jessica, Uncategorized. Bookmark the permalink.